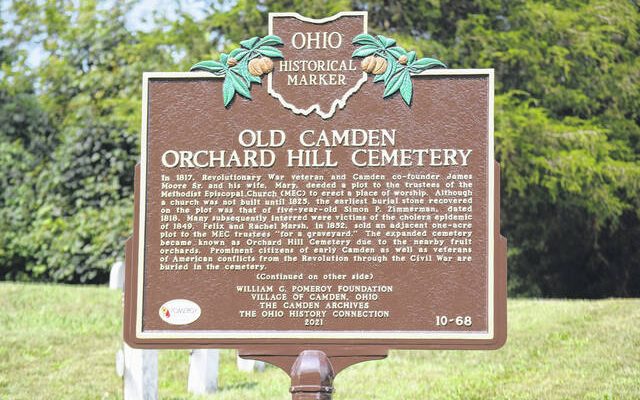 Story and photos below are from the Sept 15th edition of the Register Herald. You can read the article directly here.

The marker honors Camden’s original settlers and military heroes, as well as the volunteers who helped to restore the cemetery, a project that began in 2006. Camden mayor Karen Moss welcomed those in attendance.

“What a great turnout,” she said. “I’m so thankful for a beautiful day, I think you are too. This is a great day for Camden.”

Doug Zeek from VFW Post #1577 then led the Pledge of Allegiance. Following an invocation by Dr. Greg Jackson, Janice Blevins, who was one of the driving forces behind the restoration, provided some background on the historical marker.

“Harvey Weherley was a Vietnam War veteran and knew there were veterans buried in this cemetery,” Blevins said. “He was appalled of this condition from the many years of neglect and decided it needed to be cleaned up. Steve [Blevins] had also thought about this and wondered what he could do to make something happen. When he saw Harvey, the two masterminds got together and the task of cleaning brush began, and they soon had the help of several volunteers.”

Blevins said Steve and Harvey, alongside herself and Janet Weherley, then began recording tombstones. Walt Walters from Connersville, Indiana, helped to teach volunteers how to repair gravestones, and the group would eventually restore 117 tombstones throughout the cemetery.

“We appreciate and thank [the volunteers], along with the many Camden residents who selflessly contributed to the project,” she said. “There were several things I wanted to do for the cemetery, so I created my bucket list. One was to have an arch erected at the entrance, which was accomplished in 2010. Another was to write a book about the process and experience we had of restoring the cemetery, which was published in 2020. And to see a historical marker and installed, sharing the history of our village. With the dedication of the marker today, my bucket list is complete.”

Following remarks from Todd Kleismit, Director of Community and Government Relations at Ohio History Connection, Steve and Janice Blevins unveiled the historical marker, which was read as follows by Cherry Anderson from the Camden Archives:

“In 1817 Revolutionary War soldier and Camden co-founder James Moore, Sr. and wife Mary deeded a plot on this site to the trustees of the Methodist Epicostal Church (M.E.C.) to erect a place of worship. The first known burial here was five-year-old Simon P. Zimmerman in 1818, with interments continuing thereafter, although a church was not erected here until 1825 and used until 1836.

In 1852 Felix and Rachel Marsh sold a one-acre plot adjacent to the trustees’ original M.E.C. property “for a graveyard”. The expanded cemetery became known as the “Old Camden Orchard Hill Cemetery” because of nearby fruit orchards covering northwest Camden at that time. Many buried here were victims of the cholera epidemic of 1849. Prominent citizens of early Camden are buried here along with Revolutionary War, War of 1812, Mexican War, and Civil War veterans.

After a new cemetery was established north of the village in 1873, new interments here ceased by 1880, with some graves relocated there as this Old Camden Orchard Hill Cemetery was abandoned. By the late 1800’s, this cemetery was neglected and overgrown, seemingly forgotten. In 2006 several Camden residents felt this cemetery should be shown more respect and began restoring it using private funds with work accomplished by local volunteers. Diligent research identified as many of the interred as possible. One hundred and seventeen tombstones were restored and reset, although many others could not be found or were unsalvageable.

Today, these time-work markers again serve as silent sentinels, honoring Camden’s original settlers and military heroes, as well as the volunteers who lovingly restored them.”

After remarks by U.S. Congressman Warren Davidson regarding the 20th anniversary of 9/11 and State Representative Rodney Creech, Michael Stephenson of the Masonic Lodge #159 shared remarks.

“On behalf of the officers and brothers of Camden Lodge, It is my pleasure to offer our gratitude to those who years ago had a vision, desire, and most importantly, the willingness to devote their time and labor to the restoration and preservation of this historic landmark,” he said.

“Over the past week, as we have done our remembrance of the events that took place 20 years ago, like many of you, perhaps, have listened to a lot of broadcast TV, podcasts, internet, radio, and listened to the interviews of those who were most affected by events that took place on that day. One of the common questions that was asked that piqued my interest was, ‘What’s changed for you?’”

Stephenson said the answers have been as various as the people who have been interviewed, and he would instead ask, “what hasn’t changed?”, saying that one of the things that hasn’t changed is the enduring spirit you find in small communities.

“And as an old football referee, I had the pleasure to referee football games and a lot of country schools throughout the state,” he said. “I would see it almost invariably in every one of those places. An enduring spirit of those who had the belief and the faith in their community, and that willingness inside to make their place a better place to live; a special place to live, like those of you who’ve been involved in this endeavor in Camden.

“In 2006, a group of individuals were so moved to action to volunteer their time and labor to reclaim this sacred ground and to anoint it with the sweat of their brow and the bow of their backs,” he said. “Members of Camden Lodge have been greatly pleased to be such a minute part of that endeavor.

Before remarks by Camden councilman Kelly Doran and the closing of the ceremony by Moss, Stephenson offered up a final thanks to those who volunteered to restore the cemetery.

“In the Masonic principles, we value labor. We believe those who work for the benefit of the neighbors and the improvement of their communities is the most precious gift,” he said. “And so on behalf of the officers and brother Camden Lodge, thank you. To those who have devoted their time and labor to the restoration and preservation of this historic Camden landmark, may God bless you and keep you under his protecting care. May God bless this quaint and gentle village, and may God bless these United States of America.”

Story and photos are from the Sept 15th edition of the Register Herald. You can read it and and see more photos from the event here. 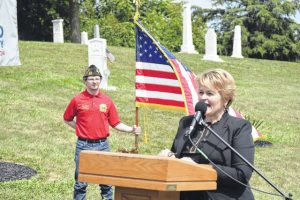 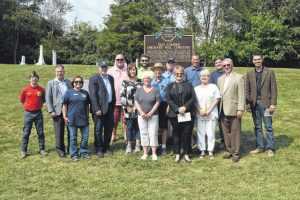 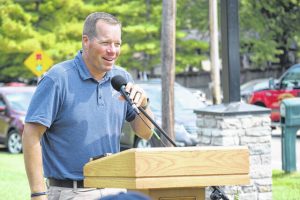 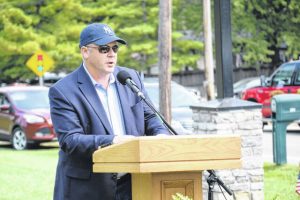 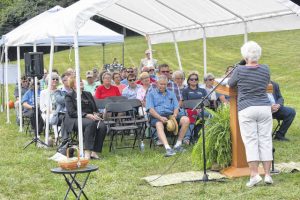 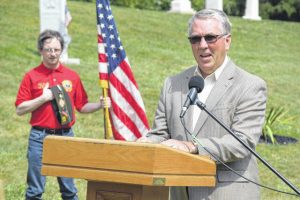 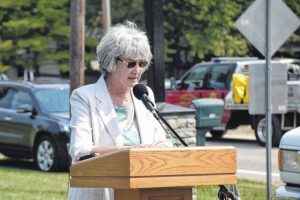 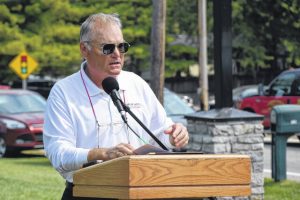 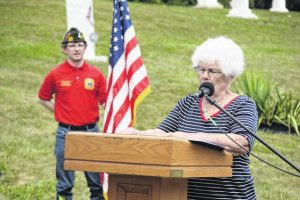